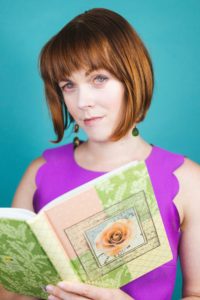 When I first started my Sudden Sight personal blog on WordPress in 2011, it was because I wanted a place to share my experiences of recovery. If I wanted to take back my life and become a writer, I had to start somewhere. Where better to start than with my own life experiences?

My first post was the night before a major eye surgery that I believed, after three years of pain and surgeries, would restore my full sight in both eyes. But that’s not what happened. Instead, the blog marked the beginning of a new chapter in my life that would lead me to self-discoveries, more pain and surgeries, new friends, heartache and loss, renewed relationships with my family, horrible insecurity and crippling depression, and the beginnings of a path to true self-love and acceptance.

Ten years since I lost what I then thought was everything I had ever wanted – and any potential version of the future I’d dreamed for myself. Today, as it turns out, I am finally beginning to truly see.

2008: The Year of the Great Recession A.K.A. the Year My Whole World Collapsed

I was originally diagnosed with juvenile rheumatoid arthritis (now known as juvenile idiopathic arthritis) on my second birthday in 1989. My very first memory in life is of my parents straightening out my inflamed knees in the living room of the condominium my mother and I shared. The JRA/JIA predominantly affected my knees, causing them to bend and curl up during the day. My doctors had me on strong immunosuppressants, and after having worn one set of permanent casts on my legs for a while to keep them straight, we had shifted to night casts that were sawed in half and held shut by Velcro straps while I slept. I remember sitting on the carpet between my parents, sobbing as they coaxed my skinny legs with bulging knees into the white plaster. Tears streaked their faces even as they spoke soothing words and pulled the straps tight. I don’t so much remember the physical pain as I remember the deep and enduring pit of sorrow and guilt I felt, knowing the pain I was causing my parents. 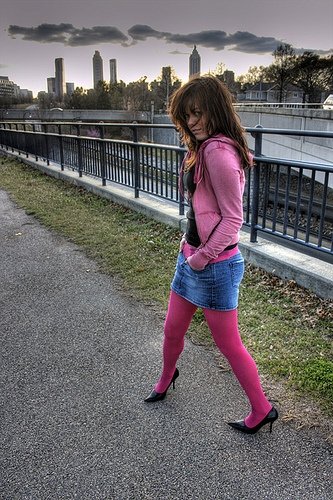 The aggressive treatments worked, though, and I was in remission for fifteen years – from the age of four until my immune system flared its Neanderthal head again in 2007. The years in between had been tainted by those early years in ways that I would only come to understand much later, and when I should have been seeking treatment and calling upon my support system, I was instead ignoring the aching in my hands and knees and building a wall between me and everyone who had ever been there for me for the first 20 years of my life.

When I did finally seek treatment in early 2008, it was because I could barely lift a glass of water with both hands, my left elbow refused to straighten beyond about 140 degrees, and I barely slept because the pain in my knees and hips kept me awake at night. To be honest, it was really only because I’d had to drop my dance classes for the winter quarter of my first year in a prestigious acting program – one I had worked so hard to get into and had walked away from my family to attend.

But just when I thought I might be on the mend, I took a medication that would rip apart my world literally overnight: Arava. Also called leflunomide, the prescription drug is an anti-rheumatic known to cause severe liver and other organ damage. As an invulnerable adolescent, I took the doctor’s concerns about liver and lung complications with a modicum of concern, hesitated with sticker shock, and started the expensive drug a few weeks later. I’d been admitted back into my dance classes for spring quarter but had also started a new job as a cocktail waitress at a night club. I needed to take whatever medications I could to stay in the program and make my dreams a reality. No matter what the cost, I could not return home a failure – albeit medically-induced. 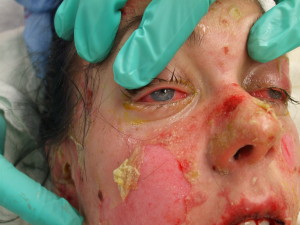 Unbeknownst even to my then rheumatologist, Arava was also being observed for its links to a severe allergic reaction called Stevens-Johnson syndrome – a reaction that typically affects up to ten percent of the body by causing ulcers in the mucous membranes and killing off the cells that hold the top epidermis layers of skin to the lower dermis layers. Within three weeks, I was hospitalized with SJS, but the allergic reaction was soon reclassified as its more serious version, toxic epidermal necrolysis. Within a week, TEN removed 85 percent of my skin and severely affected all my mucous membranes, especially in my eyes. The mortality of TEN at the time was around 40 percent, and recovery would cost me nearly all of my “carefree” twenties.

I say all this to shock you, yes. But I also say it because it happened. Because it happens to nearly 2 million people every year to some degree, mostly children. And because it gives you a glimpse into just how far I’ve come since then – not just in spite of my experiences, but because of them. 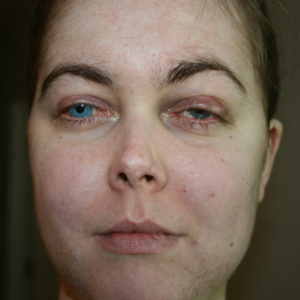 In 2011, I underwent surgeries on each of my eyes by a world-renowned SJS eye specialist in Miami. I remember seeing the wall of photos in his waiting room: pictures of smiling children with disfigured eyes posing with the great Dr. Tseng post-surgery. The man does brilliant work, and the surgeries he performed for me that May (and several more in the subsequent years) were “textbook,” so he said. That is, until my rheumatoid arthritis kicked in, inflaming my eyes and pushing scar tissue back into my vision. We thought we could control the scar tissue in my left eye, which has maintained at least 20/40 vision since 2008, and restore vision to my right eye, in which I became legally blind during my first year of recovery. Without going into detail in this post about Sjogren’s syndrome, limbal stem cell deficiency, and the horrors of feeling utterly helpless as you quickly lose your most relied-upon sense (sight), I will simply say that my vision problems are entirely related to post-SJS complications and surface damage to the stem cells protective epidermal layers of my eyes.

The 2011 surgery did not restore vision in my right eye, however. And we are still fighting the scar tissue that grows again and again into the vision of my left eye. In fact, my next expected eye surgery will likely entail a partial or full corneal transplant – a risky surgery not regularly performed on young patients because of the risks it entails. I have been terrified of this surgery for over a year now. My corneal specialist Dr. Hamilton, an amazing doctor and surgeon who has been with me for every step of this ordeal since I came to him with heavily scarred eyes in 2008, tells me every six to eight weeks that it’s only a matter of time before my vision becomes too impaired.

And yet, I’m still seeing. 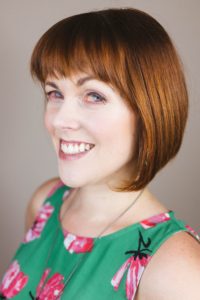 Better than that, after a voluntary surgery with Dr. Amerscua at the Bascom Palmer Institute earlier this year (one that wasn’t even expected to help all that much) and the use of a specialized scleral lens, I have begun for the first time in ten years to see more than light and movement with my right eye. My lens specialist Dr. Gotay cried with me when I saw that big blurry E at the top of the traditional vision chart. Today, with my lens in, I can even make out very blurry versions of the S and the L on the 20/200 line of the chart. I walk outside and stand in awe at times, as though suddenly having peripheral vision again on my right side has made the colors of the world brighter. Maybe it has. To me it has.

And even better than that, for the first time in my life I have begun to internalize the very real truth that I am a loved human being with value, and I have an amazing support system of people who actually care about me and are willing to be there for me.

In the past year, I have begun to reach out in ways I never thought possible. After living with chronic depression and anxiety for as long as I can remember, I have spent the past three years engaging in multiple types of therapy. I see an individual therapist who specializes in interpersonal talk therapy for my PTSD and complex PTSD. I am part of a graduate student support group at the university where I am a Ph.D. candidate. I have worked with a psychiatrist to use medication to help alleviate certain symptoms and restore chemical and hormonal balance to my brain. I see a top rheumatologist and use medications like the biologic Remicade infusions to lessen my immune system’s inflammatory response triggered by RA. I also use an anti-inflammatory Autoimmune Paleo diet and lifestyle for this. I practice yoga and have learned how to meditate. I’ve spent time with multiple individuals I consider to be mentors and spiritual guides who have helped me find the path toward recognizing the true, innate, inherent value of existence. I have laughed. I have cried. I have shared my story with others and really listened to the stories others have shared with me. I adopted a dog. I started having the really difficult conversations with my parents that most people only dream about being able to have. 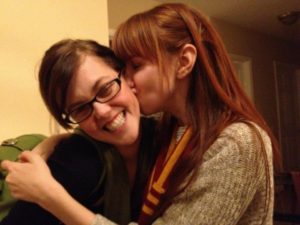 In all that time, I realized that these past ten years – during which I have been disfigured, disheartened, in physical, psychological, and emotional pain, arthritic, and partially visually impaired – I have learned, experienced, and seen clearly so much.

I experienced the total wreck of a blazing bonfire in my life and, looking back, can suddenly now see how the ashes of that conflagration mixed with the rain of my tears and with each ray of my hope to grow something more beautiful and fulfilling than I could ever have imagined.

If that isn’t true sight, I don’t know what is. 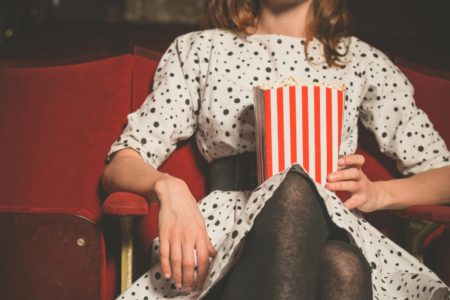 Do I Deserve It? Dealing with the Feelings of Brokenness in a World That Says You Must Always be Happy and Whole 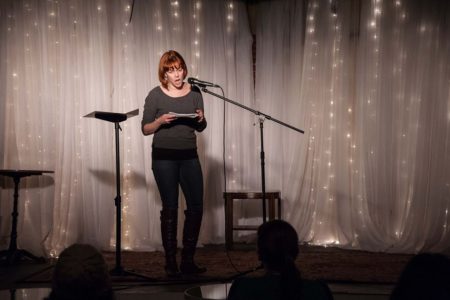